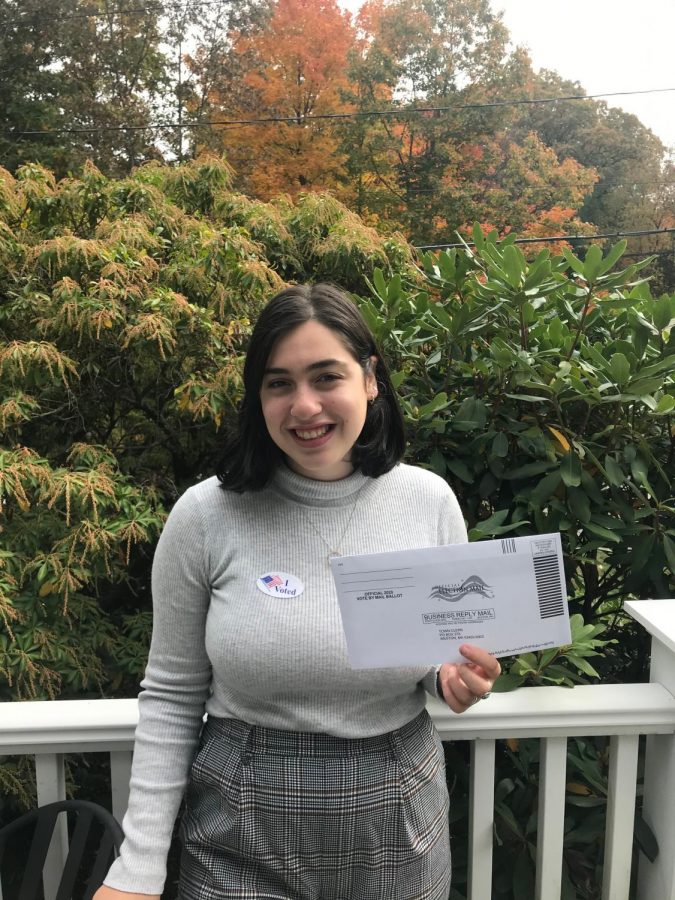 Gotbetter poses with her vote-by-mail ballot as she votes for the first time.

While this year’s presidential election has generated campaigning and attention both nationally and locally, it has also reinvigorated the conversation around voting– specifically youth voting. As the country faces a number of deeply dividing issues and crises that will affect us directly both now and in the future, it is imperative that on November 3 our generation exercise our democratic right to vote and have our voices and opinions heard.

Though the youngest generation could have a great say in this election, historically youth voter turnout hasn’t been the strongest as politicians haven’t engaged in issues important to younger voters.

“I think politicians right now aren’t paying nearly enough attention to those issues that concern young people because of the historically low rate of voting among them,” History department head Kerry Dunne added. “They care a lot more about their constituents who have a higher rate of voting.”

While this may seem discouraging to many youth voters, one of the quickest ways to combat this issue directly and force politicians to consider youth constituents and their opinions is to make sure as many of us as possible vote.

“Their voice is just going to matter a lot more if young people can get their voting rates up,” Dunne said.

Voter turnout in general is actually a very powerful thing. According to an infographic created by Forbes, in 2016 the U.S. voter turnout was only 55.7%, which trails other countries like Belgium (87.2), Sweden (82.6), and even New Zealand (75.7) and France (67.9). Not only does this reflect poorly on our country’s engagement in our democracy, but it as well means not every voice is being reflected in our government.

There are many differing opinions on why U.S turnout is so low, but one answer is certainly connected to misconceptions around voting, particularly with younger age groups.

“I think that a lot of people think that their vote doesn’t matter, especially here in Massachusetts,” senior and first time voter Nate Icke said.

While this instinct may be a popular one, quite the opposite is actually true. Results have continuously shown that elections can be close, and each individual vote has real power in determining the outcomes. In 2002, Al Gore lost the major swing state of Florida to George W. Bush by 537 votes, a margin which was initially too close to call (History.com). Even here in Massachusetts, in 2010, a state House race ended in a tie that was eventually decided by only 56 votes (NPR).

Numbers and turnout have the power to shift entire elections and according to an infographic from the Pew Research Center, the percentage of eligible voters in Generation Z (ages 18-23) has doubled since the last election. In a close election, determining a winner could actually come down to younger and first time voters. Our generation has also been at the forefront of several major movements and political issues in recent years, which only further provides reason for us to vote and continue our involvement in these conversations. We can also prove to politicians that we do in fact care about what they are doing.

“I think now more than ever I see a huge amount of young people who are really politically involved and informed and focused on making thoughtful changes,” senior and first time voter Mimi Gotbetter said.

Voter advocacy has not always been targeted at young people, which does seem to indicate that candidates did not count on our vote or interest. But candidates like Massachusetts Senator Ed Markey and Minnesota State Senator Matt Little have seemed to notice the passion our generation has online and have taken to the social media app Tik Tok, which is dominated by a younger demographic. This type of engagement is helpful to young people in spreading information and starting conversations, but it can also be extremely useful for candidates like Markey, who recently won a tight race in the primaries.

With the election and recent spotlight on social issues, apps like Instagram, Facebook, and Snapchat have also become grounds for massive youth advocacy. If students have the ability to repost news, graphics, and opinions online, they certainly should be taking their passion and engagement to the polls.

“I think it’s especially important for young people to vote because we are the generation who is going to have to deal with the issues of what’s happening now in the future,” senior and first time voter Nasarith Berhe said.

While having a say in democracy and current issues are important reasons to vote, many people in this country are blocked from having the same accessibility to voting as we do, which should only further inspire us to utilize this opportunity we are lucky to have.

“There’s a lot of voter suppression happening across the country, especially in communities of color, so I feel that as someone who has the privilege to easily vote it is my responsibility to do so,” Gotbetter said, “if you truly believe in these American ideals about equality and everyone having a say it’s your responsibility to do all that is in your power to make sure you and everyone around you are able to vote.”

In a place where it is easy to vote by mail and in person, every eligible WHS student should be casting their vote on or before November 3. Whatever your beliefs may be, if young people on the whole want to be represented in government, voting in elections is the easiest way to be heard by politicians and shift those conversations.