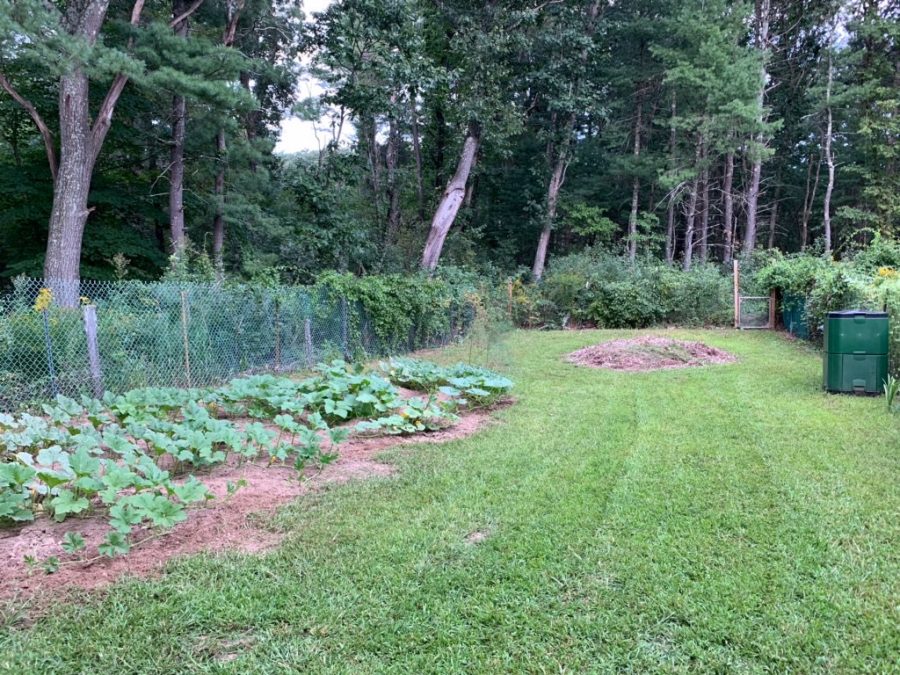 The plot of land where the Luu brothers compost food scraps and yard waste.

In the fall of 2018, senior Nathaniel Luu and his brother, freshman Theo Luu, revived Munch Poop, an award winning composting project that they started in elementary school. Their goal is to give Weston residents a place to compost their food scraps.

“We noticed that the Weston Transfer Station didn’t have a way of dealing with food scraps. Right now, it just goes into the landfill incinerator when food scraps are brought to the Transfer Station,” Theo Luu said. “We thought that it would be better and more environmentally friendly if we could compost.”

To further understand the process of composting, Theo Luu described how it works.

“When you put the food scraps or yard waste in the compost pile (we use an aerobin), it sits there and composts over time,” Theo Luu said. “There are a lot of different organisms in there to break it down. It usually breaks down over a five month period.”

The Luu brothers acquired a plot in the Weston Community Gardens and repurposed it for their composting needs on June 1, 2019.

“Once a week, families drop off their scraps at our plot in the Weston Community Gardens. We put recycled five-gallon buckets from Whole Foods for families to dump their food scraps in,” Nathaniel Luu said. “The same day, we come to weigh the food scraps, or greens, and dump them into the Aerobin 400 composter to compost. We also add in browns, or carbon, which are dry leaves and sticks.”

Due to their experience, the Luus knew how they could solve potential problems.

“When we first started to compost, our problems were [the] smell and it was too wet, with water leaking out of the bin,” Theo Luu said. “We realized that we had to keep the stuff we put in the compost bin more clean, so that’s why we just use uncooked fruits and vegetables. We solved the leakage problem by adding more browns because if we just put in a lot of food scraps, then it’s going to get too wet, so we need dry leaves to dry it up.”

But having a composting system at the Weston Transfer Station isn’t the Luu brothers only goal.

“We are working with the schools to get an on site compost bin. That’s one of the things that we want to do so that I can compost their food scraps in a more long term manner,” Theo Luu said. “We’re also working on having a way to convert it into renewable energy. There’s companies that have a service that they go to certain places to pick up the food scraps and they get these large 64 gallon totes, and they bring it to a facility in Boston, and it converts into renewable energy.”

The Luu brothers started their composting project in elementary school when they entered a contest for Warren Buffett.

“My brother and I entered this business competition and we came up with the idea to educate people, specifically students, about climate change through an education kit,” Nathaniel Luu said. “We passed into the semi-finals and into the top three teams.”

The Luus eventually decided that they didn’t have enough time to grow MP, so they took a break.

“We were focusing on investing and more about that stuff, and we were exploring more about that. We were looking at different environmental companies and looking if we could invest in those,” Theo Luu said. “We sort of returned to it because my brother was always interested in the composting thing.”

Even though the Luu brothers have an economic interest in composting, they still understand the importance of their work for the environment.

“To see all the produce that could be recycled and be used biologically go into a landfill, is going to become a problem,” science teacher and SEA club advisor Janet Kresl Moffat said. “Getting people individually to do the composting, one by one, is a great project.”

To help, you can contact the Luu brothers at 20luun@weston.org or mp@munchpoop.com to volunteer at their plot at the Weston Community Garden, or you can submit climate change art to help raise awareness.