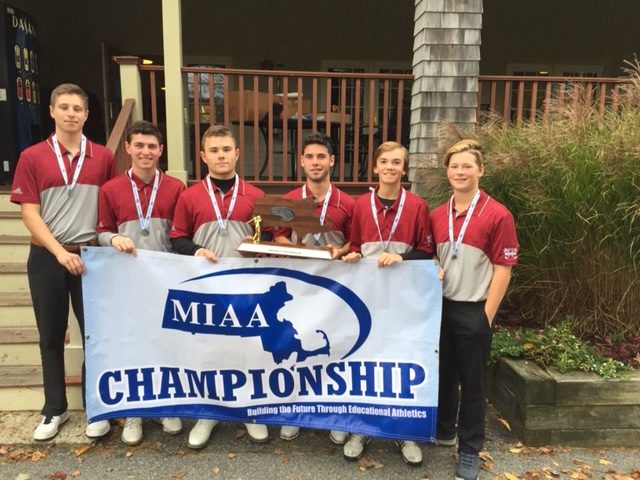 The WHS varsity golf team ended their 2019 season with a second-place finish in the Division 3 State Tournament on October 28 in Harwich, Massachusetts. After a successful season, the Wildcats finished with a 9-4 record, additionally winning the Division 3 North Sectionals and the DCL Small Championship.

Although disappointed with the second-place finish for the State Tournament, the team recognized their accomplishments.

“It was tough knowing that we only lost by 3 strokes, and that if we all made one more putt the outcome could have been different,” senior Noah Igel-Dunn said. “Nevertheless, it was a great season and second place was still amazing.”

“I could not be happier about how this team came together and performed,” Finard said. “Every player on the team improved as the year went on. As individual as the sport of golf is, we played for each other, which was key in our playoff run.”

Like Finard, numerous members of the team emphasized the importance of their unity.

“Chemistry on the team is very solid all the way through. Everybody gets put with one other teammate for each match, but nobody seems to care who they are put with because we all have great chemistry,” sophomore Conner Burke said.

Similar to Burke’s opinions, head coach of 17 years Mary O’Brien further elaborated on the importance of this team’s chemistry and unity.

“They were very supportive of one another. The upperclassmen definitely took the newer players under their wing and helped them understand the team culture,” O’Brien said. “This made everyone realize that in order for the team to be successful, you can’t have one superstar; you need to have a whole body of players who are dedicated to working hard and playing hard.”

The leadership and experience of upperclassmen also played a large role in matches this season.

“We had to put in a lot of work in order to beat a lot of the teams. Everyone on the team put in a lot of effort to make sure their game improved every week,” senior captain Cooper Griffin said. “I think my leadership made an impact before and after matches because I could connect with a lot of players.”

Although the team’s season is over, members are already looking toward the future of the program.

“I think there is a very bright future. We had a bunch of freshmen and sophomores on the team this year who have some potential. Cooper leaving will sting, but we have a solid young core,” Finard said.