“Radium Girls” to bring tragedy and comedy to stage 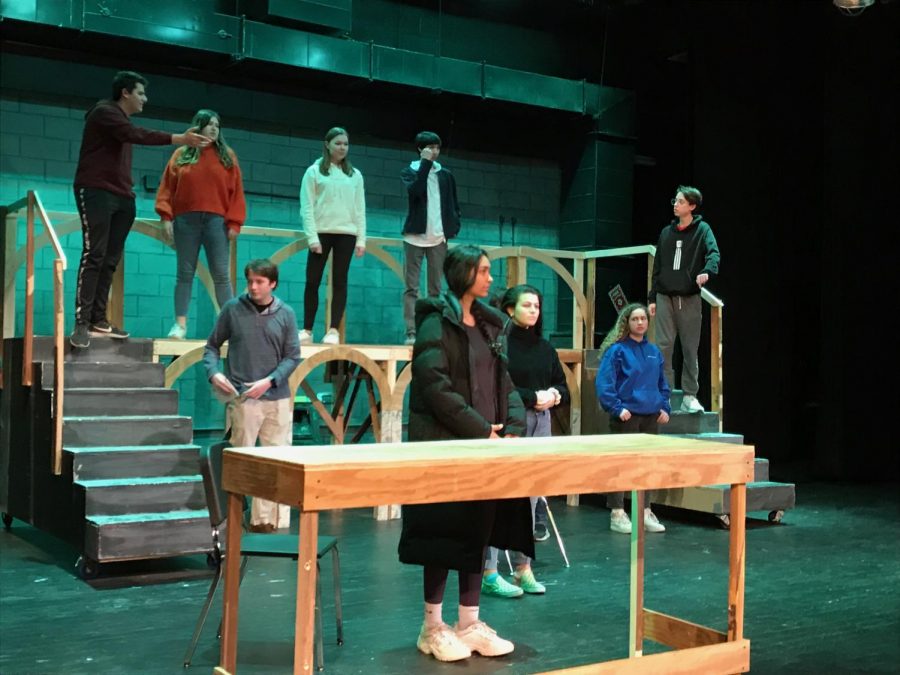 Theater Company members stand solemnly on stage at the beginning of a scene in an after school rehearsal.

The WHS Theater Company will perform a dramatic recreation of history with their one-act production of “Radium Girls” this February. Mixing whimsical characters and tragic plot twists, the show centers around the factory women who successfully sued the U.S. Radium Corporation in one of the first famous legal battles for workers’ rights in the country.

As they have done in previous years, the Theater Company, or T.CO, will produce a one-act play for the Massachusetts High School Drama Festival. Drama director Anne Slotnick explained her decision to choose this play.

“[‘Radium Girls’] fits a really nice spot in between comedy and drama,” Slotnick said. “It’s about a serious, tragic thing that happened, but it’s written in a light-hearted way at times.”

Despite being based on historical events, “Radium Girls” shows themes relevant to modern day.

“One thing we are talking about in rehearsals is how timely and relevant it feels to be a spokesperson for a group that is being victimized for whatever reason. There are a lot of times in high school or [in the] greater culture and pop culture that relate to that,” Slotnick said.

The production of the show, such as the set and costumes, will also contribute to the historical aspect of the hour-long play.

“We’re really focusing on the outfits these women wore,” Slotnick said. “Their aprons, shoes, and dresses physically glowed in the dark because of their exposure to radium and phosphorus. We are working on how to make that glowing effect happen on stage.”

Sophomore Alex Muzila spoke about the research that will go into an authentic performance.

“Some of the difficulties of doing relatively unknown shows such as this is that they require extensive research into the context of the story, rather than being provided with similar resources when doing a more well-known show,” Muzila said.

Muzila also spoke about the contrasting tones from the beginning to the end of the show.

“[The show] is generally cheerful at the beginning, as most characters are content with their lives,” he said. “But as the tragedy starts to take hold and tension arises, there is more visible pain, emotional and physical, across the faces of the actors.”

Given the subject matter of the show, students in T. Co will face more serious and dramatic characters compared to the comedic characters of their fall production, “Twelfth Night”.

“The dehumanization of these girls and how they received no reparations for what they had to go through is hard to talk about,” junior Margeaux McCaughey, who plays the lead role of Grace Fryer, said. “When you are literally dying in your mid-20’s and these companies keep putting it off, waiting for you to die, it’s really difficult to have courage and bring it to the courtroom.”

As opening day approaches, Slotnick spoke about what she wishes to convey through the show.

“I am excited to spread this story about these brilliant and devastated women who had this horrible thing happen to them, but [who] left a legacy and an impact legally,” Slotnick said. “What we know as the basis for workers’ rights comes from this story and this group of women. People should know about it.”

Come support “Radium Girls” by seeing the performances on February 27, 28, and 29 at the WHS auditorium. An additional performance will be held at the drama festival on March 14.