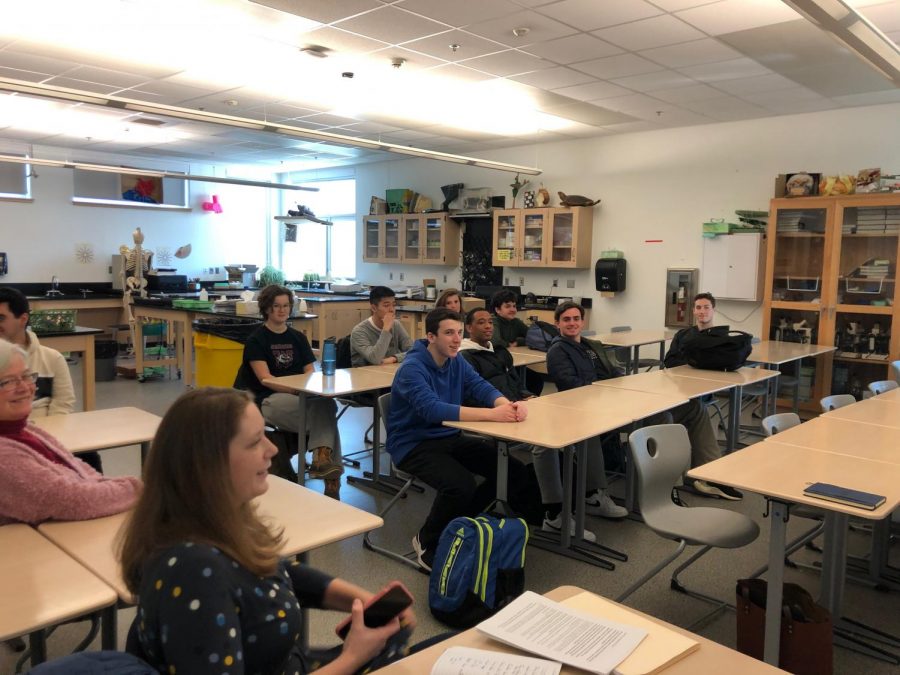 Students from SEA club listened to a presentation from a Weston Sustainability Committee member.

For the past 30 years, one of the clubs at WHS that has attracted many students is the Students for Environmental Action, or “SEA Club.” The SEA Club aims to tackle issues of climate change by promoting good recycling habits and informing students about what they can do to address global warming issues.

“SEA Club’s main goal is to promote environmentalism in the school and in the larger community. We do this by both facilitating environmentally friendly activities and by raising awareness of green issues, ” senior Thea Kendall-Green said.

Although the club has only been meeting for the past five months, they have already worked to make WHS more environmentally friendly by making changes in classrooms and the cafeteria.

SEA Club has focused on reducing the amount of waste that WHS produces and also on spreading awareness to the students.

“While our number one priority is raising awareness, donations are always welcome as they allow us to further support our mission,” senior Carter Sullivan stated.

Sullivan, who joined SEA Club in his sophomore year, has come up with ideas to get the Weston community more involved in dealing with issues of global warming.

“[SEA Club] has handed out Dum-Dums [lollipops] to parents who weren’t idling in elementary school pick-up lines, given away a box of munchkins to a student who frequently brought their water bottle to school, and coordinated an earth-themed prize giveaway to raise awareness during Global Climate Strike week,” Sullivan stated.

Members of the club have plans for what their next steps will be to further raise awareness and encourage more environmentally friendly activities.

“At the moment, we are specifically interested in the expansion of our composting project, the efficiency of the waste stream at WHS, town-wide environmental projects, and generally creating a more environmentally conscious student body,” Kendall-Green stated.