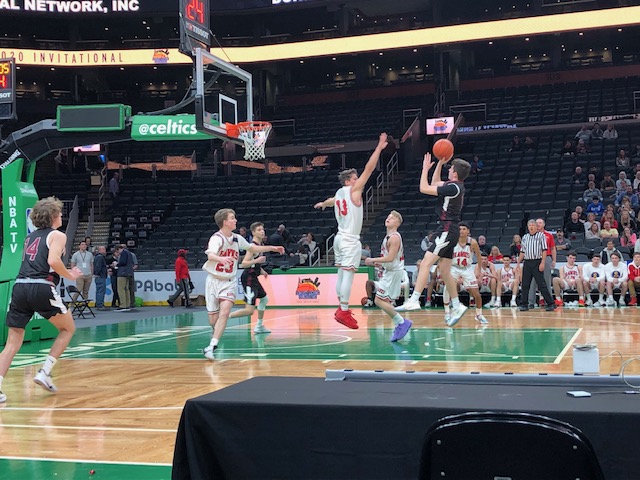 Junior Will Van Houten takes a jump shot against Waltham.

The Weston Wildcats boys’ varsity basketball team was granted a unique opportunity on January 25 as they faced off against Waltham. The game was a part of the Andrew Lawson Foundation Invitational at the TD Garden in Boston, which is the home of the Boston Celtics.

While the Wildcats lost the game by a final score of 70-39, all players took with them a memorable experience that may help them this season.

“Basketball has been my life,” freshman Wyatt Stephens said. “So to play [at TD Garden] was one of the most exciting things I have done in basketball.”

Stephens’ excitement was shared by other members of the roster.

“The team was excited about going to the Garden to play. The morale after the game, although we lost, was high, which is always good,” junior Christos Iatridis said. “I think overall everyone was happy about being able to play in the Garden and experience what it is like to play in a big stadium.”

With the size of the Garden being much larger than the high school gyms Weston generally plays at, there was potential to be distracted.

“I truly have to look at it as just another game. I mean, there were small moments of awe, like when standing at the free throw line, it was a huge ‘WHOA’ moment for me, but my focus on the game never deteriorates,” junior Alton Jenkins said.

Despite the experience, the team recognized they need to play better if they are going to succeed.

“We can not just show up to play; we need to actually want to win,” Iatridis said. “No one was hungry, and when we come out playing Waltham again in two weeks we need to bring it to them and not make careless mistakes like putting the ball to the floor.”

Iatridis further elaborated on how the game may help the Wildcats succeed and achieve their goals in a couple of months.

“This experience will definitely help us down the line when we are playing in the same stadium for the semifinal, which I believe we will be playing in,” Iatridis said. “Playing there was crucial to having the upper hand on the opponent who may have not played there and know what it is like to play there.”

Jenkins added how playing at the Garden may help Weston handle pressure situations in the future.

“There was the element of playing in the Garden with the crowds, but those jitters are gone,” Jenkins said. “I feel confident in each and every one of my guys on the team that on whatever court we play, we’ll handle business. There’s no more fear or nervousness with the Wildcats – we’re here to fight.”