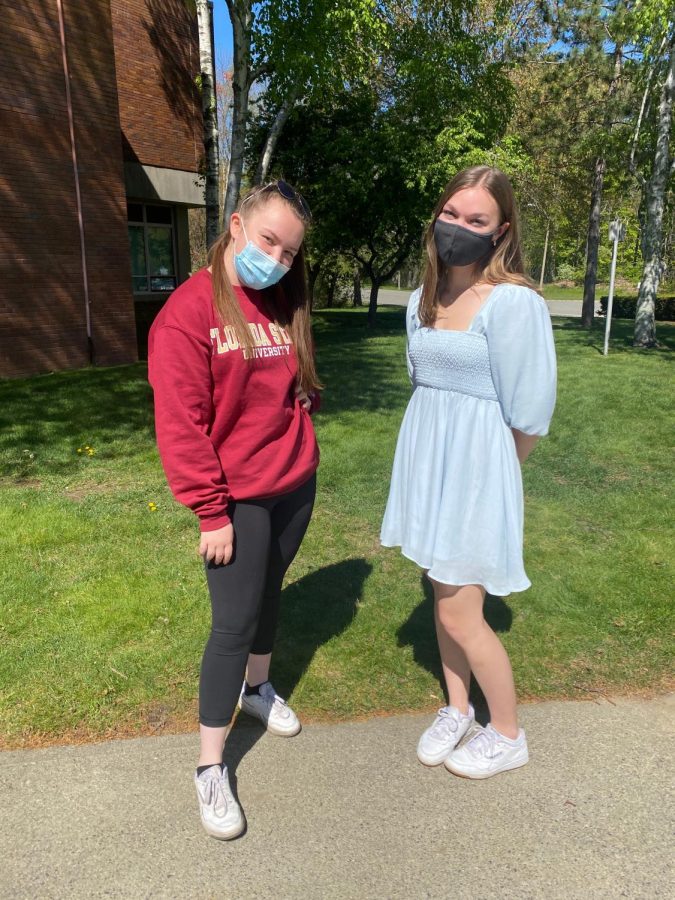 Seniors Margeaux McCaughey and Maddie Tremblay posing on their last day of school.

While the college process was slightly different for everyone involved this year, WHS seniors Margeaux McCaughey and Maddie Tremblay experienced the extra challenges of planning and shooting application films during the global pandemic. Tremblay has committed to Florida State University and McCaughey to NYU Tisch, which both have BFA, or Bachelor of Fine Arts, film programs.

“[It was] incredibly time consuming. Each program has different requirements for what they want to see, usually encompassing five creative supplements on top of the school specific ones,” McCaughey said. “Overall, I think I had roughly 45 supplements across my nine schools. From September through December, all I did was work on my apps.”

Like McCaughey, Tremblay spent a lot of her time planning out and organizing her written work.

“My process of getting [together] documents, stories, films, and all of the required material took many months,” Tremblay explained. “From filming over this past summer in order to make my short film that would be the face of my application, to writing stories in screenplay format, [the process] was very demanding.”

Furthermore, both students found that the COVID-19 pandemic allowed for them to have more time to work on applications.

“Personally, I probably benefited from the extra time I could spend on my apps during the hybrid model,” McCaughey said. “It was a lot easier to work on my essays in between my zoom classes than it would be in a normal year.”

For their applications, both Tremblay and McCaughey had to adjust their filmmaking process to fit social distance protocols.

“Because of the pandemic, I had to write, shoot, act, and edit everything myself, whereas you would usually have 2-3 people help you,” McCaughey said. “It was a lot of running around and could be really tedious, but I will say I had fun doing it.”

Despite the extra workload, however, applying to film school to pursue her dreams is worth it to Tremblay.

“Through films I have come to appreciate the world. Whether it is the sounds that I hear around me with my strong musical background, or the spectacular view from hundreds of feet in the air with my drone, it is through film that I want to build my career,” Tremblay explained. “As the child of two musicians, I have come to understand what it means to be passionate about what you love and to pursue that passion relentlessly, and I find that through film.”

Similarly, McCaughey friend, junior Alex Muzila, described how impressed he is with her work as a filmmaker.

“Margeaux has really interesting ideas. From what I’ve seen of [her] films, I know she has a lot of artistic capability, really cool ideas, and messages that she wants to share,” Muzila explained. “She has a lot of potential.”

Muzila also shared his thoughts on the appeal of the entertainment industry to young creators like McCaughey and Tremblay.

“That fact that TV and movies are so present in everybody’s lives, especially when you are a teenager, means there is so much you can do with it,” Muzila said. “Although film has existed for over a hundred years, it is still a very open field.”

While film is prevalent in everyone’s life, McCaughey acknowledged the difficulties in entering the industry.

“Obviously I have plans to work in the industry, but I think you kind of have to have an open mind in terms of the future,” McCaughey said. “It’s a really hard industry to break into, but there are also so many things you can do with film besides just working on movie sets and TV shows.”

Tremblay has similar goals for her career path.

“As of right now, I would love to film movies around the world. Possibly documentaries with National Geographic, work on international films with a film corporation, or maybe just do my own freelance work,” Tremblay said.”But I am honestly very interested to see where I end up and who I may work for.”

Now that both students have experience committing to their schools, Tremblay has advice on how one should go about the application process to apply to film school.

“Plan ahead, make a schedule with personal due dates, create an organizer with a huge to-do list, and then just push along. Teachers are here to support you through this process, [and you should] ask for [their] help [by] having them edit your scripts, artistic statements, and watch your movies,” Tremblay said. “Start your film application process as early as possible, and keep in mind that most film school application due dates are November 1.”