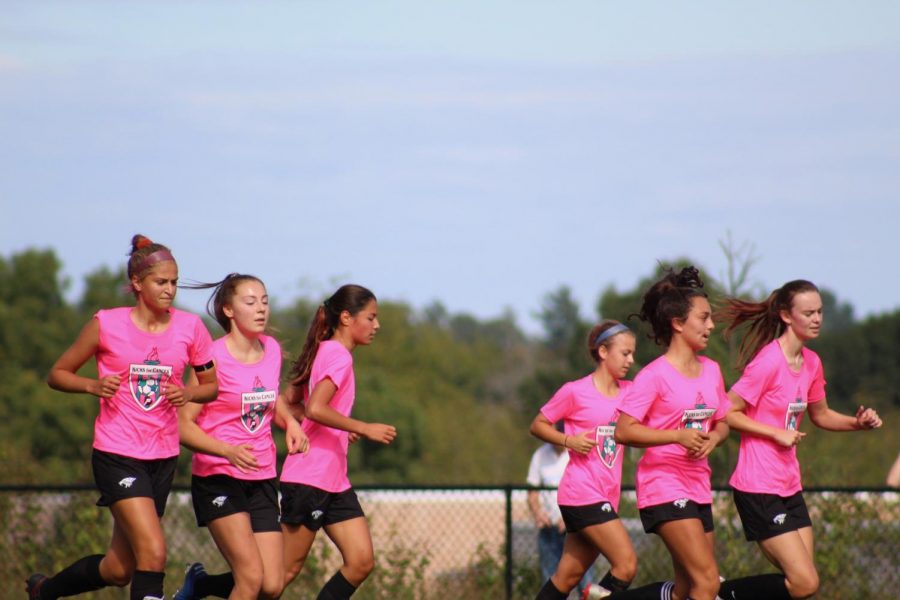 Players celebrate after a goal at Kicks for Cancer Fundraiser.

As October continues on, Weston girls varsity soccer is in full swing and the team is fighting for a spot at States. Even as they face multiple changes in coaching, Covid guidelines, and the team itself, the players have been working hard to dominate.   One aspect that many girls on the team consider of the utmost importance has been the support they give each other, which has pushed them to improve and stay positive while playing.

“It’s really fun because when you make a save, everyone’s excited and it’s really motivating,” said freshman goalie Brady Jacobson.

Although the team spends a lot of time together on the field during games and practices, the players also participate in frequent team bonding activities outside of school. The captains of the team are Natalie Ladosci, Morgan Rome, Emilia Tutun, and Lily Swanson, and they try to emphasize the importance of team bonding to  the Weston Girls Varsity Soccer team

This season thus far, the team has played a total of three games. The team as of now has lost one game, tied one game, and won one game.

“If you had offered me in preseason the chance to say after three games you will have only given up one goal, you’ll have turned in a wonderful performance against a big school and only lost by one, oh and by the by you’ll beat your arch-rival four to nil, and you’ll be passing the ball around like professionals, I would have taken that, in a heartbeat so it’s a great start to the season,” said Weston girls varsity soccer head coach John Power.

The captains on the team have big plans for the season and express their happiness with the teams playing.

“My goals [for the season] are to be a good leader and help maintain our team chemistry so the girls can continue our culture and traditions,” said senior Morgan Rome. “Also, I want us to play well and win, which comes from consistency in training.”

Other players who have played on the team consistently over recent years observe the way their roles on the team have changed as they’ve become some of the older players.

“It takes a lot more leadership because I am now an upperclassman and there’s more responsibility to set a good example for freshmen and sophomores, but it’s still fun in its own way,” said junior Julia Hanson.

The season stretches from mid-August to October 31, 2021. But after the regular season, the team will have a chance of qualifying for the state tournament, which has recently changed its qualifications to make it more fair for smaller schools.

“We’re a small school in a big-league; eight of the eleven teams in our league are among the fifty or so largest in the state,” said Weston girls varsity soccer head coach John Power.

Some of the seniors who have been on the team since their freshman year of high school have also noticed changes related to Covid protocols and the team dynamic.

“This year’s team is way stronger than any of the other WGVS teams I have been a part of,” said Rome. “We play a more technical style because we have a larger number of girls with club experience than prior years, which is great given that we have such a young team with five freshmen.”