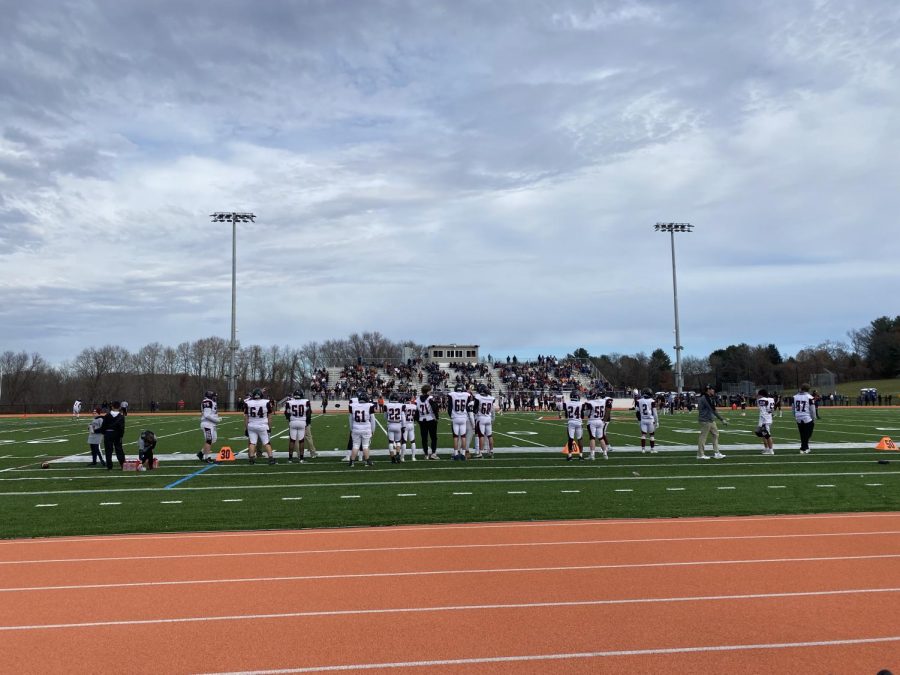 For the past 85 years, the communities of Weston and Wayland have come together on Thanksgiving Day to face off against each other in their annual football game.  This tradition allows Weston High School students to gather and watch their friends play as the rival teams face off for a win. This year the win went to Wayland, who beat Weston 34-7.

Although the loss was tough, there were other aspects that added to the excitement of the game. This year was head coach Jim Wilcon’s first time coaching the Weston Thanksgiving football game.

“This is actually my first year as the head football coach at Weston, but I had ten years of college coaching and high school experience before I got the job; I played for Newton South High School and then the University of Rhode Island.” Wilcon said. “I always liked two things about football: the strategy involved, and being part of the team [while] competing with my teammates.” said Wilcon.

For athletic director Michael McGrath, the Thanksgiving football game is a unique tradition that is meaningful to more than just the players.

“In Massachusetts, unlike most states in the country, Thanksgiving day football is a big thing. This is how most high school teams conclude their seasons. It’s kind of a cool tradition,” said McGrath. “People go out, go to the game, see people that they graduated with; graduates come back and see old friends. It’s a real event for the community that everyone wants to be a part of. It’s a great day with a unique atmosphere. And then you go home and have your turkey dinner.”

In order to ensure the football game was organized properly this year, many people pitched in to help out.

“There is a lot of behind the scenes work that goes into it with regards to tickets and making sure that we have officials and that the field is ready,” said McGrath.

“We expect large crowds, especially when both teams are doing well,” said Mcgrath.

Given the ongoing concerns about COVID, which cancelled the game last year, some wondered if this year’s game would also be affected, but ultimately, the game was able to be played with few changes.

“All of our spectators, officials, and student-athletes for outdoor sports do not have to wear masks anymore. [Everything] is pretty much back to normal,” said McGrath.

While the team ended the year with a loss, the game was the culmination of a solid foundational year with their new coach.  For Wilcon, coaching in Weston has been a very positive experience on which he hopes to build.

“I love teaching the guys how to play the game. I love watching them improve and having success and the camaraderie and chemistry we have being part of something special as a tight group, and I love competing and putting our guys up against anybody we face.”

Wilcon’s positive attitude was reflected by his players prior to the game.

“Our focus is really the same as for any game. Even with this game having more meaning behind it, the focus doesn’t change. We want to execute to the best of our ability, use our strengths and attack their weaknesses.”

Students were just as excited as the coach to attend this game.

“I’m excited because it’s a fun tradition, and it’s a time when I can connect with old friends who are on break and back from college,” said junior Julia Hanson.

Senior Natalie Ladocsi agrees. “It’s awesome to see all of the Weston alumni come back from college and support Weston for the big game.”