50 years of Red Tide at WHS 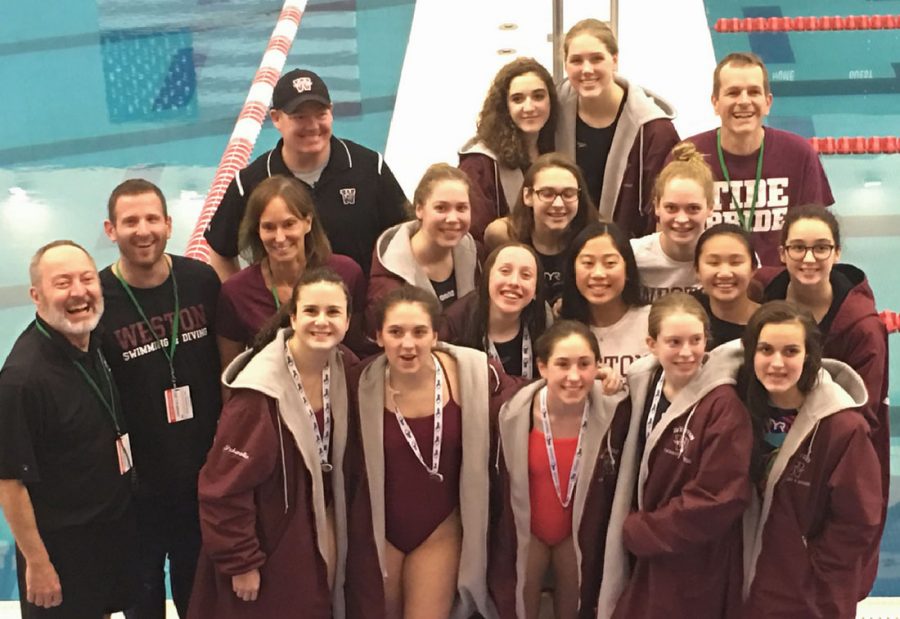 This school year, the Red Tide/GLOWS swim teams at Weston High School celebrate their 50th anniversary. According to the head of the math department and current head coach Jim McLaughlin, the 50th anniversary is more than just a date.

“It is a really great opportunity to reflect on all of the amazing athletes, coaches, and memories that we have had,” McLaughlin said. “I [also] see it as an opportunity to step back and appreciate what has been accomplished in the last 50 years, as well as give appreciation to the coaches that came before: Foley and Valle.”

While the Red Tide’s 50th anniversary is dedicated to the triumphs of the program, its alums, and the swimming community at WHS as a whole, it is also to appreciate the coaches that have led this program, including Claude Valle. Valle swam for four seasons on the team when he was a student in Weston, was the assistant coach at WHS for 19 seasons starting in the late 1980s, and became head coach at WHS in 2007 and remained in that role for 13 years, finally retiring in 2020.

“I was fortunate to work with dozens of amazing and talented coaches over the years, but none better than my predecessor, Pete Foley, and my successor, Jim McLaughlin,” Valle said. “Pete had a vision and got this whole thing started – I merely kept the ball rolling. Jim is a good man who really cares about kids and knows that sport. He is also a fabulous coach.”

In addition to commemorating the swim team’s coaching staff, Valle has been reflecting on the team’s dynamic and how its athletes have shaped the success of the Tide/GLOWS program.

“We all did our best to keep it about the team first, above all else, [and] always highlighted athletes that sacrificed individual attention for the good of the team. We gave as much time and energy to the struggling newcomers as we did to the stars,” Valle said. “Generally, the outward successes of championships were the result of a team that was healthy on the inside. If everybody can find a role in which they can contribute, the team will do incredible things.”

“Each senior class has its own personality and so there are definitely some changes that happen from year to year. We have had groups that have graduated that have left us wondering how we can have a team without these amazing athletes,” McLaughlin said. “But the program has been successful for so long that expectations of hard work and positivity are built into our community, [and] remain even after a class graduates.”

These expectations of hard work and teamwork as emphasized by the Red Tide/GLOWs community are felt by senior swim captain Siobhan Lacey.

“When I was a freshman on varsity, there was a lot of pressure to do well because everyone around me was so talented and I didn’t want to let them down. I don’t exactly know how to explain the energy around the team, but something about it captivated me from day one and made me want to work harder,” Lacey said. “For myself and my team, I pushed myself every practice and every meet so we could accomplish great things.”

Similarly, senior swim captain Andrew Chiocca recognizes that being on the swim team shaped him as an athlete and made him a better teammate.

“Coming in as a freshman, I always thought of swimming as an individual sport and never really cared about the team but after the countless trips to Five Guys after meets, making jokes on the bus rides, and the endless support I felt from the swimming community, I was able to see what it meant to be a part of the Tide,” Chiocca said. “Joining the swim team taught me about camaraderie and what it means to rely on others in a sports setting, and joining the team gave me a second home.”

In addition to teaching lifelong lessons like camaraderie and teamwork, simply being a part of the program led Lacey to discover and create core values that she carries with her every day.

“The team has taught me to push myself to places I never thought possible, to never cheat my way to the top because without hard work it will all fall apart, and that working as a family will make you that much stronger as a team,” Lacey said.

Athletes part of the Tide/GLOWS program long before Lacey and Chiocca felt these feelings of home, hard work, teamwork, and pushing yourself for not just your personal gain but for the team, etc. In fact, Claude Valle can attest to these sentiments.

“As an athlete, being on the team really helped me to grow up. I learned about team, the value of hard work, [and] to listen to mentors and trust peers. I [also] learned what I was capable of and I think the program continues to do that for student/athletes to the present day. Both in high school and at college [Northeastern University], swimming gave me a peer group and many lifelong friends,” Valle said. “To me, it’s a place where kids learn delayed gratification – that in the long run, hard work pays off. It’s one of the most important lessons in life.”

Pete Foley, the first head coach of the Tide/GLOWS program who started in 1972 and retired in 2007, also understands the importance of swimming in the lives of those he has coached.

“As I reflect back, and see what swimming has done for so many of these kids, I think that the lessons that they take from swimming carry them well into adult life and is part of their overall development,” Foley said. “The thing I am the proudest of is they are all great people, exceedingly successful, and are super parents, and I like to think that this foundation started at the pool. As a coach, my biggest excitement was to take kids not very accomplished and have them make something of themselves, which is exactly what these people did.”

Even in retirement or after graduating from WHS, the Tide/GLOWS program stays connected.

“We may not be in touch on a regular basis, but when things come up, we are always there for each other. We’ve had alums come back for big meets, to talk to the team, and rally around fellow former athletes facing life challenges. It’s quite remarkable,” Valle said.

For some alums, they never drifted far from the pool. In fact, in the last seven years of Foley’s career, Foley coached against his son Mike, the head coach for Wayland.

Ultimately, the most important element, which has been built up for 50 years, of the Tide/GLOWS program goes beyond the success of individual athletes and their accolades.

“To me, it represents a really tight-knit community. I think the athletes feel like it is their second family, and the most important thing to the coaches and athletes is the community feel,” McLaughlin said. “This 50 year anniversary really allows us to reflect on the tradition of this team and allows the current athletes/coaches to think about their place in this program that has a rich history. We have the opportunity to carry on these traditions that have been going on for such a long time and that is an honor.”