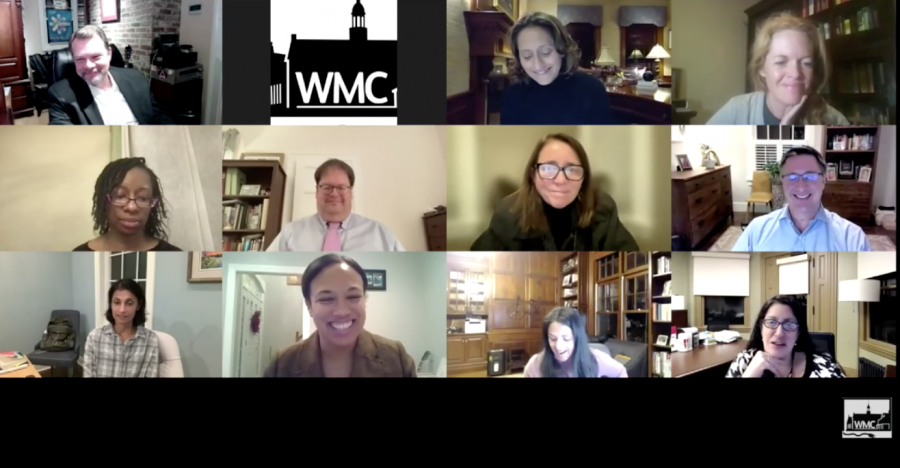 Taken by Divya Rajan from video made by Lee McCanne

School committee members in action during a typical meeting

Who makes the decisions that affect the future of the school body? Who is in charge of this decision making? How can students get involved in the process?

“One really nice thing is that there are a bunch of different skill sets,” Raman said. “We cover all the schools, which is really good, because I feel like it’s just good to have a window into all the schools. I think that’s really helpful.”

In previous years, the school committee meetings were held in-person, though due to the pandemic, the format has changed.

“It’s a Zoom webinar, but for public comment people can raise their hands and then be let into the panel. Then they can participate by video so we can see them,” Raman said.

Additionally, the meetings are recorded and uploaded to the school committee agenda and minutes section of the Weston Public Schools website by Weston Media Center for people to view at any time. There is also a specific format for each meeting consisting of opening business, major business, other business, and an adjournment.

“We start with opening business, which is just general updates of anything that’s happened in the last two weeks, nothing major. The major business tends to be sort of bigger things, not necessarily time sensitive, but just bigger things that people might be interested in. Then the last thing we talk about is what’s called other business. And that’s usually administerial stuff like approving past agendas, and just really minor stuff, and then we adjourn,” Raman said. “There’s always time for public comment, usually right before major business, but the time varies. If we think there’s a time when people will likely have more to say, we try to include it then, but we always try to give people a chance to speak.”

Muzila further explained the main responsibilities of the school committee.

“There’s three main roles that the school committee has: one is to oversee the budget; secondly, to set, review and create policy; and then third is to hire and oversee our superintendent,” Muzila said.

To acknowledge the importance of student voices in the process of decision-making, committee members feel that increased student involvement is beneficial and can help to better focus on topics of higher relevance to students.

“The more input the better. Everybody who has something to say about anything should come to the meetings, should email us, should let us know. We want to do something to help in some way, make the kids’ experiences better,” Raman said. “So our hope is to always be really aware that our decisions do impact students.”

“I think the full committee would love to see more students come to the meetings, especially since they’re virtual for now. We’d love to see students actually ask questions during some of that public comment or question time,” Muzila said. “We’re going to start having open office hours, where two of us at a time will be available on Zoom. Maybe we can organize certain groups of students to come talk to us during those times or people can just drop in.”

Currently, there is a student elected from the Student Advisory Council to attend the school committee meetings. This year the SAC elected representative is senior Ryan Wims. Wims further described the responsibilities of all students in SAC in relation to the school committee.

“In prior years, I would attend a monthly meeting with different members from the PTO, school board, and school administrators. In these meetings they would present their plans to the SAC representatives from each grade looking for our input and a different perspective,” Wims said.

The school committee covers a variety of topics concerning the student body from the elementary schools up to the high school. At a recent meeting held on December 6, discussed topics included the 2022-2023 Middle and High School program of studies, updates about the Covid-19 pandemic, and the approval of the 2022-2023 district calendar. Wims elaborated on decisions made previously by the school committee, which were discussed during meetings with all SAC members.

“In previous years we were asked about the parking situation, the pros and cons of an 8 vs 5 day schedule, and our opinions on the effectiveness of Advisory,” Wims said.

Raman also explained the process for how an idea gets approved by the school committee.

“For bigger issues, we talk about something one week and then vote on it the following meeting. It gives us a chance to discuss something and it also gives people, the public, a chance in the meantime to be in touch with us, let us know what they think,” Raman said.

Raman further emphasized the importance of students and parents sharing their ideas and being involved in the school committee meetings.

“I just encourage people to reach out with whatever comments they have or questions. I’ll be in touch and I really do want to know, especially students, what you think,” Raman said.