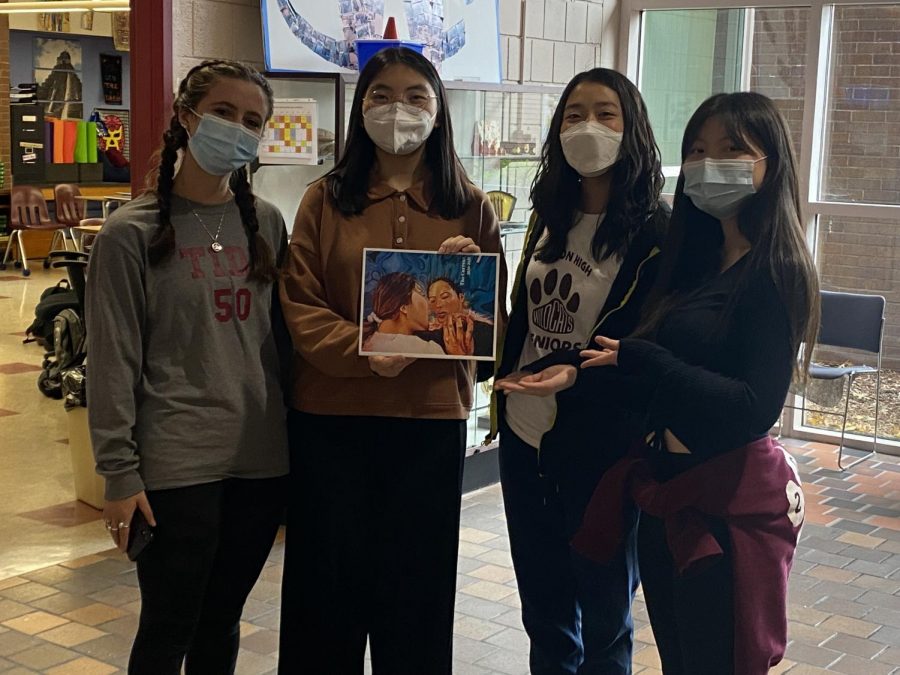 Members of the Literary Magazine pose with the 2020 edition.

Not all aspects of Weston High School are determined by faculty and staff. WHS offers students the opportunity to contribute more to the school by creating clubs based on their own passions. Some clubs are large and well-known, but there are others that enable smaller groups of students to come together and focus on a very specific interest or passion.

An example of one of these clubs is the WHS literary magazine, “The Current,” which was founded to benefit the artistic minds of the school.

“We aim to cultivate a supportive community that encourages artistic expression,” said senior and literary magazine co-president Anna Lian.  The magazine provides an outlet for poetry, prose, and art created by students.

“The issue last year was about 50 pages of poems, short stories, pictures of peoples’ sculptures, photography, paintings, and graphic design,” English teacher and Literary Magazine co-advisor Matthew Henry said. “It varies from year to year depending on who submits.”

Through writing for the magazine and being a part of the club, students are able to express their feelings on a deeper level.

“I write these words on this page because I hope they will capture the essence of these shadows and extract them from my mind. I hope the paper will be their new home,” wrote senior and writer Hanna Wang in last year’s issue. “I no longer want to be lost.”

Unlike the Literary Magazine, the International Food Club doesn’t require any artistic skill to participate. Instead this club provides those with adventurous taste buds a chance to learn about other cultures. Although Covid rules require the food  be pre-packaged when brought to club meetings, the International Food Club still allows people to explore food from around the world.

“The International Food Club aims to celebrate different cultures through food,” senior and club president Zara Nip said. “I first started this club with the idea of breaking through geographical barriers to offer fresh tastes not usually offered through school lunch.”

With this goal in mind, Nip designs weekly meetings to explore and talk about cuisine from all over the world.

“Weekly gatherings consist of eating various cuisines, playing games, and having fun discussions. Beyond school meetings, we have organized trips to food festivals,” Nip said. “[Also], we’ve eaten snacks from many different areas of the world including Taiwan, France, and Britain. ”

“I noticed that a lot of our school lunch options are somewhat limited in terms of different cultures, so I hope to bring an international perspective to Weston High School,” Nip said.

Bringing change to WHS isn’t just limited to the International Food Club. The Active Minds club is made up of a small group of students looking to change how mental health is addressed at WHS.

“I feel as though the majority of students suffer from some mental health issue, whether it be depression, anxiety [or other issues],” senior and club president Sarah Lappi said. “Active Minds plans to bring awareness to mental health and destigmatize it in the school system so we can better understand it and eventually help overcome these issues.”

Despite being a very young club, Active Minds has already attempted to increase mental health awareness at WHS.

“In September for suicide awareness month, they put a lot of posters out in the cafeteria,” Erin Foley, a school psychologist and advisor of the club said. “They put sticky notes about positivity in the girls bathroom too.”

In addition to spreading awareness throughout the school, joining the club allows members to become part of a community that focuses on their own mental struggles.

“I think it’s a really great space for people to connect around mental health,”  Foley said. “At the meetings they don’t just talk about projects, but they ask each other how they’re doing.”

WHS also features clubs centered around the empowerment of certain minority races and religions. The Jewish Student Union (JSU) was created in order to empower the school’s Jewish community and provide a space for them to comfortably talk about things relevant to its members.

“In a school where Jewish people are a minority, the group gives an affinity space for them to have whatever the students feel they need for support,” science teacher and club advisor Leah Gordon said.

JSU aims to use this affinity space to provide mutual support.

“It’s about coming together,” said senior and JSU president Lola Philipkosky. “Together we talk about antisemitism and Isreali culture, which helps us understand our identity.”

“There are stereotypes about Middle Eastern people, as far as assuming some of us could be potential terrorists,” said sophomore and member of the club Siena Ferrucci. “But having time with others who are similar to you is nice because they understand you and I understand them.”

By creating spaces where people can find others who share some element of their identity, these clubs give students the opportunity to express themselves.

“I’m obviously Jewish, but I’m also a Weston teacher, and a Weston mom, and I like physics and chemistry,” said Ms.Gordon.“There’s all kinds of stuff you can know about a person; and I like that the full self of a child could find a welcoming place in the high school.”

Unlike courses and electives, clubs in WHS are created when a student decides to share their interests with others. So being a part of a club allows students to be a part of a community that shares a common goal.