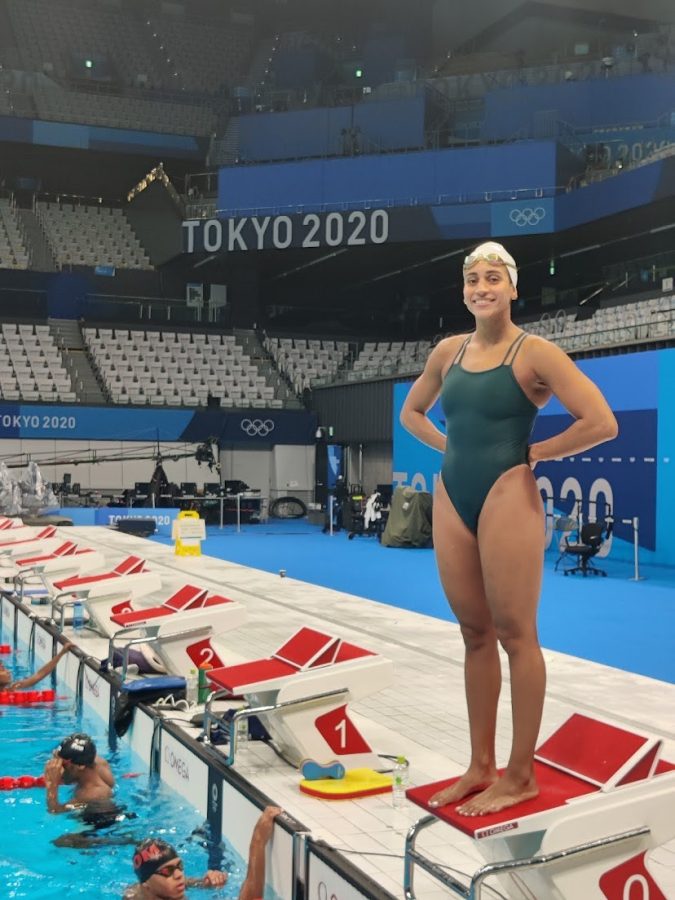 Julimar Avila prepares to race at the Tokyo Olympic games.

Julimar Avila, a 2015 graduate of Weston High School, fulfilled her lifelong dream of competing in this past summer’s Olympic Games in Tokyo, Japan. Her journey started from a very young age and continued throughout her high school and college years. She faced many obstacles, but with determination and a positive outlook, she was able to qualify as a swimmer for the Olympics.

Avila was originally born in Boston while her parents and older siblings were born in Honduras. Because of this, she received dual citizenship at birth, which made her eligible to represent Honduras at the Olympics. Over time she developed extensive pride for her country because she would spend summers, holidays, and birthdays there with her family.  She also began swimming with a team in Honduras.

“I would go back every year and spend the majority of summer there. As soon as school would end, I would fly to Honduras and then fly back two days before school would start,” Avila said.

Constantly having to travel from the United States to Honduras did not interrupt Avila’s training. However, she juggled the pressures of balancing the commitments to both swim teams while also completing her school work and getting good grades.

“The only time it was especially difficult to travel was when I had swim meets in Honduras. For my parents to allow me to go, I had to work with my teachers to get most if not all of my work done in advance,” Avila said. “If that did not happen and I would miss work, it would be hard to complete it if I did not understand what was going on. Ultimately I tried to get ahead to not fall behind.”

All of this training and traveling for swim competitions helped Avila transition to the high school swim team. During her seasons on the WHS swim team, she worked on and benefited from her disciplined training. She has many happy memories from both swimming and school.

“I still have favorite teachers that I cherish after all of these years. I hold on to what I learned and the relationships that I formed,” Avila said. “I made so many good friends and memories that I will never forget.”

Her time on the swim team was the highlight of her high school experience and one that she will always cherish. Her coach at that time, Claude Valle, who retired recently from the role, has vivid memories of what Avila brought to the team.

“She is incredibly hard-working, focused, driven, and she has an uncanny ability to perform at the highest level under almost any circumstance,” Valle said. “She always held herself to this incredibly high standard and as an athlete, I do not think I have ever seen anybody who always performed at the top level as Julimar did.”

Being a METCO student also created its own set of challenges for Avila, especially because she had to make the long journey to and from school every weekday, which could be tedious. Monday through Saturday, she woke up at 4:00 am to commute to her club practice that was 40 minutes away, and on Sundays, she would participate in drylands workouts. She loved swimming and was committed to doing anything that would help her get even better.

“With swimming, you need dedication and a good sleep schedule, which I had to figure out with all of the homework that the teachers gave,” Avila said. “In the end, I had to choose between going out with my friends or getting a good night of sleep before the early practice I had the next morning. I wanted to become better, so I made that social sacrifice.”

The top two focuses in her life were school and swimming. Since it was hard to balance work and social activities, Avila knew she had to prioritize swimming over socializing.

“I knew I was making a better decision for a better future in my sport as well as my academics, but that did not make choosing swimming over hanging out with my friends any easier,” Avila said.

To focus on club swimming and her schoolwork, Avila took a break from the school swim team and swam with her club team during her sophomore and junior years. Avila returned to the high school swim team for her senior year. That senior year swim experience proved to be a great break from the stress of the college recruiting process because she swam even better than she had before. She fell in love with racing again and attributes lots of that shift to the comfort and togetherness that the team provided her.

“I loved having [my senior year with The Tide] be my last year of high school swimming.  Given all that the team accomplished and looking back, it is almost like it was the best possible thing in the world, being successful with teammates that encouraged me since day one,” Avila said.

Based on the years working with Avila, Valle knew that she had the potential to go to the Olympics from a very young age and always believed in her throughout her journey.

“There have probably been dozens of kids that have said that they want to go to the Olympics. There have only been a couple where I have said that this kid could actually have the talent and has the drive” Valle said. “But it’s even more than that. It’s more than hard work and being talented: you have to be incredibly stable and have perspective, and that is Julimar.”

After high school, Avila studied and swam at Boston University. For Avila, BU was the only college that offered her another meaningful community where she felt at home. The BU swim team fostered hard work and she excelled to a point that her Olympic goals were within reach.

When Covid-19 hit, her local training facility shut down. Fortunately, she was offered the opportunity to train in Florida and she jumped at the opportunity. Training with that team helped motivate her even more, especially knowing that some of her teammates were also trying to qualify for the Olympics. To help prepare, her routine became “Eat. Swim. Sleep. Repeat.”

“Going to the Olympics has been a dream of mine since my first international meet at the age of 11. It is always how I saw myself in the future, so I knew that I would give it everything I had,” Avila said.

After being postponed due to Covid-19, the 2020 Olympics were rescheduled for the summer of 2021. While Avila is immensely grateful that she had the chance to represent Honduras, and in such an important way, things proved to be very different in Tokyo than at any prior Olympics. Safety guidelines were strictly enforced, including masking and wearing gloves in the cafeteria. The situation worsened when Avila was unexpectedly quarantined. She was notified that someone on her flight on the way to Tokyo that had been sitting only a few seats away from her, had tested positive for Covid-19. As a result, she was quarantined and cooped up for two weeks alone in her hotel room.

“I was very upset at first. It was as if all of that hard work, all of those early morning practices, all of those hours spent at the pool, could be unutilized” Avila said. “I soon got the point when I realized that everything happens for a reason and if this is where my journey led me, then I knew I had to stay calm and remain positive.”

After weeks of sitting by herself in her room, she was finally able to leave. However, she was released the same day that she was scheduled to compete in her 200 meter event. Avila was nervous about only being in the pool once during that two-week quarantine period. She knew she just had to give it her all and focus on finishing.

“In my head, I was just super happy to be there, I was proud of myself, my parents were proud of me, and my friends were proud of me,” Avila said. “I went in thinking that with everything that happened, all I needed to do was swim my best 200 meter race and finish, and I could say that I swam at the Olympics.”

At the Olympics, she participated in the second qualifying heat of the women’s 200 fly and placed fifth. This advanced her to the semi-finals, where she placed eighth. Even though she was not ecstatic about her times, she knew that she had given it her all throughout her journey.

After achieving this major life goal, Avila has learned to keep a positive outlook on everything she is, and she is just happy to be where she is today. She loves to inspire people and encourage swimmers at all levels. Avila can share her story to inspire young kids with dreams just like hers and often does so when she travels around the world for competitions.

“If I could offer anyone advice, it would be to stay determined, keep your drive, and remember that not everything happens on the timeline that you want,” Avila shared. “Perseverance and routine are key, and also mental health is super important. You have to enjoy what you are doing and if you are enjoying what you’re doing and you have the drive, nothing can stop you.”