Policies for open campus and free blocks changed this year 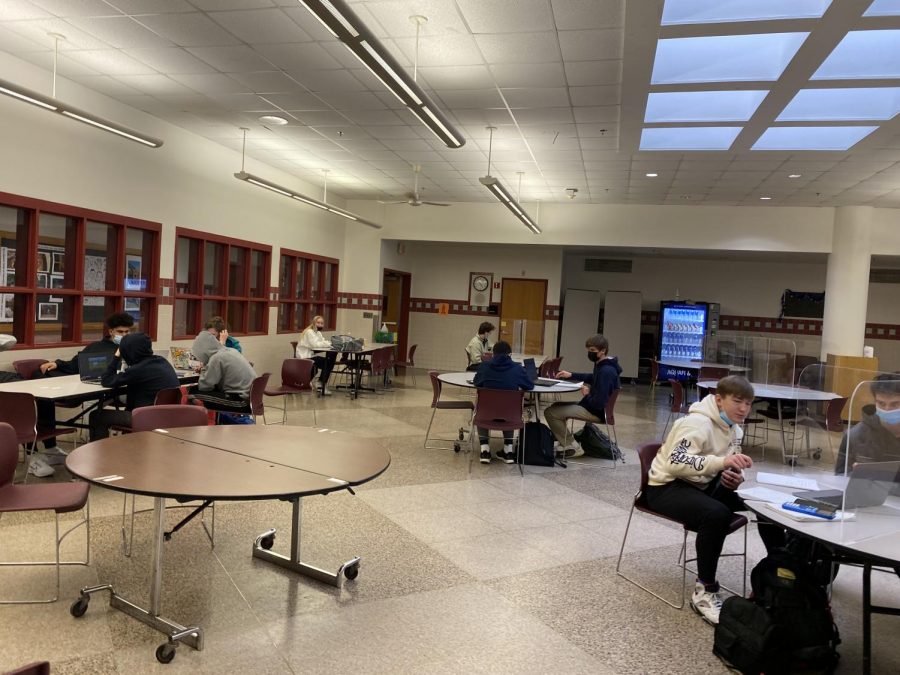 Junior section of cafeteria during a study hall

Due to the restrictions required by Covid last school year, all students were given study halls instead of frees for unscheduled blocks; this year, that practice was continued for all except seniors. Weston High School made a policy change at the start of this school year to eliminate free blocks for sophomores and juniors.

For many years, when freshmen had an unscheduled block, they were assigned to study halls, but sophomores and juniors had free blocks; now only seniors continue to have frees.

“[The WHS] leadership team has talked for a few years in a row about limiting open campus,” Assistant Principal Kelly Flynn said. For this year those discussions led to the change in policy.

WHS adopted open campus for juniors and seniors six years ago, but due to Covid, in the 20-21 school year the school administration implemented new safety protocols, which required more restrictions to students’ leaving and returning to school. Prior to that, open campus was a system in which juniors and seniors could leave school whenever they had a free as long as they returned on time if they had another scheduled block. From the start, however, the administration had concerns with students not returning within the allotted time period and had heard stories about what happened while some students were off-campus.

“We’re really conscious of safety. There is a lot of vaping going on, so that’s a challenge,” said Flynn. “I also know a lot of sophomores and some freshmen were leaving campus without permission. We don’t have the manpower to oversee [who is coming and going]. So that’s how we landed where we did,” and that along with Covid led to a reconsideration of the policy last year that has in part been continued this year..

To improve student safety and decrease the risk of student exposure to the virus during the school day, last year’s policy involved keeping students in the building for their full school day by adding study halls for all and eliminating open campus. While some changes were made to this policy this year, the administration decided not to return to a fully open campus for upperclassmen.

This year seniors are the only students who have permission to leave campus when they have unscheduled or free blocks. Due to this change and the loss of frees in general, many in the Class of 2023 feel as if they have lost the privileges of being upperclassmen.

“It’s frustrating because I’m sixteen years old and still treated like a kid, and I’m tired because I’m continuing to miss out on things that made me excited to be a junior,” junior Ava Angelucci said. “Each grade is supposed to have its privileges so there’s something exciting about the next year of school.”

While current freshmen and sophomores have never witnessed upperclassmen having free blocks and open campus, the current juniors were in the building the last time both existed.

“I do think that juniors are struggling with it because they as freshmen saw juniors and seniors have it, so I do understand that they may have been expecting to have that privilege more than the younger classes,” Flynn said.

Juniors are still given more freedom, as they are able to arrive late to school if they have a study hall first period, can leave early due to a study hall last period, and are the only class eligible to visit the library during a study hall.

For some juniors, however, not being able to take a break in the midst of their busy days makes it harder to cope with the pressure of the college process and school in general.

“Going home for a certain period of time allows students a little time to reset before the next class,” junior Shreya Mehta said. “In addition, many juniors feel like they are being babied and hand held, which is a stark contrast to the intense pressure from college applications and testing.”

While students recognize the advantages of leaving school, for Flynn, the greater advantages may come by having more students remain in school with their peers during the day.

“When I first came here, there was a real culture in the cafeteria, with study groups and students helping each other,” said Flynn. “I’d like to see that with more students because I think that kind of environment is really, really helpful.”